AICA > News > Members news > Going along without a body: A Comment on the Sound Track Ritual

Going along without a body: A Comment on the Sound Track Ritual 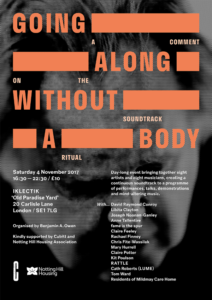 Going along without a body: A Comment on the Sound Track Ritual

A festival exploring sound and ritual

This is a non profit event and all proceeds go to the artist and venue.

In B.S. Johnson’s novel House Mother Normal: A Geriatric Comedy (1971), a nursing home matron provides an introduction to the characters in the novel (eight elderly residents in her care) and the events about to take place: ‘we will join our friends dining, first, and later singing, working, playing, travelling, competing, discussing and finally being entertained’. What unravels is the story of one social evening spent together in a care home, told from eight points of view in exactly 21 pages each, starting with the most lucid of the ageing narrators and ending with the most confused, forgetful and in pain, whose pages are left largely blank. The book is a real-time recording of simultaneously unfolding thoughts, desires, reactions and interruptions – all taking place within the same time frame, all revolving around the same set of events, told again and again by the house-bound residents.

Taking B.S. Johnson’s story as a framework, Going Along Without a Body brings together eight artists and eight musicians: a continuous soundtrack running throughout this daylong event, with musicians dropping in and out as a backdrop to a loose schedule of performances. The day is loosely organised around a set of open instructions: dining, singing, working, playing, travelling, competing, discussing and being entertained. Among rituals of sound tracking, repetition, influence and coercion, this event seeks to assemble a sonorous body with a dissonant communion of voices.