Canadian Cultural Centre in Paris donates 25 Years of Archival Material to the Archives of Art Criticism in Rennes, France 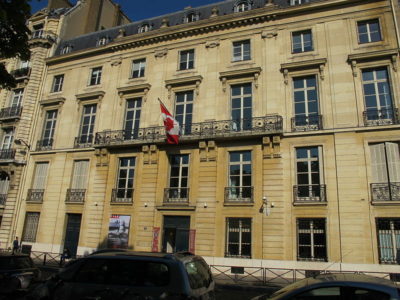 On 17 May, the Canadian Cultural Centre inaugurated its new space at 130 rue du Faubourg Saint-Honoré, in the 8th arrondissement in Paris. From now on will it will work in close contiguity with the Canadian Embassy in France. In making this move, Canada has decided to create a new dynamics, by concentrating its efforts in one place and allying its cultural to its diplomatic activities. This has led to the creation of a new gallery devoted to the visual arts at the very heart of its new building.

To mark this occasion, and the turning of a new page in the history of cultural relations between Canada and France, the Canadian Cultural Centre/ Canadian Embassy in France wish to announce that they have established an exceptional, one-off agreement with the Institute national d’histoire de l’art and the Archives de la critique d’art for the future preservation of the archives of the Canadian Cultural Centre in Paris. Under this agreement, the  Cultural Centre, under the umbrella of  the Canadian Embassy and Global Affairs Canada have  decided to donate their archival holdings in the visual arts for the last twenty-five years to the Institut national d’histoire de l’art (INHA), for integration into the collections of the Archives de la critique d’art, in Rennes, within the  organisational framework of the Groupement d’intérêt scientifique(academic research consortium) linking the INHA, the University of Rennes 2 and the  International Association of Art Critics (AICA). The archival holdings that are being donated to the Archive de la critique d’art represent a unique convergence between an important facet of cultural diplomacy and a vision of contemporary Canadian art developed over the years by a succession of artistic leaders anchored in the French cultural and institutional scene and in the history of art criticism in France. The holdings cover 25 years of exhibitions at the Canadian Cultural Centre and a wide range of partnerships in the visual arts between the Centre and a large number of French institutions and cultural organisations, in addition to a quantity of documents relating to the history of the Canadian Cultural Centre from the time of its creation in 1970 onwards. The combination of their thematic coherence, diverse contents and cultural significance means that they constitute a uniquely homogenous body of documentation of its kind, which will provide an invaluable resource for researchers at a national and international level, and a valuable asset in the long-term promotion of relations between Canada and France. Its impact may be expected to extend far beyond the area of immediate concern, to create a ripple effect in the broader field of international relations. The exchanges that have taken place between artists,  curators, critics, and writers lie at the  heart of these  holdings, which preserve the traces, not only of institutional relations, but of multiple human relationships, resulting in the realisation of hundreds of  projects in France that were supported  with the active financial and logistical support of the Canadian Cultural Centre.

This donation is both an important symbolic act for Canada and France and an act which gives concrete expression to the relationship of trust and individual links of friendship that unite our two countries. The fact that these archives will henceforth be preserved in France fits in with Canada’s overall diplomatic objectives. Canada and France share a common intangible heritage, to which these archival holdings bear important testimony.

The first part of the holdings was handed over last March and has already been made accessible to researchers in Rennes. The second part will be made available in autumn 2018. The agreement that has been concluded provides for additional donations of archival material illustrating the activity of the Canadian Cultural Centre in its new location to be passed on to Rennes at regular intervals, for evaluation and conservation alongside the core donation of material relating to the Centre’s visual arts programme over the last 25 years (1993-2017) at its former location on the Esplanade des Invalides. The  collections of the Archives de la critique d’art, which are mainly concerned with everything relating to the promotion and interpretation of contemporary visual art, will thus be enhanced and enriched by a gift of material that provides a fitting counterpart to its existing holdings.